The ancient La Corona residence offers a selected range of activities to make your holiday unique and unforgettable. Our staff is available to suggest and organize:
• Excursions by private boat to the coasts and islands of the Maddalena Archipelago with catering service on board
• Horseback riding
• Diving to discover the marine world and the beauty of the seabed of the Costa Smeralda
• Golf sessions at the Pevero Golf center, one of the most beautiful courses in the world, at special rates
• Guided climbing on mountains overlooking the sea
• Visits to the best local wineries, to discover the taste of the best Sardinian vines
• Surf and Windsurf
• Deep sea fishing sessions accompanied by the best local professionals
• Archaeological excursions to admire Nuraghe and Tombe dei Giganti

In addition to all marine sports (sailing, diving, surfing), this area offers other prestigious sports opportunities. The 13 hectares of grass and granite of the Shergan racecourse are available for riding schools, pony schools, riding stables, training, horse boarding, equestrian trekking. Several national and international competitions are held there but its fame owes above all to the Costa Smeralda polo cup. In this enchanting glimpse of Sardinia, the spectacle of the eight competing knights competing for victory in a noble competition that is thousands of years old is unmissable.
The Pevero Golf Club, recognized as one of the best golf courses in the world, smells of myrtle, strawberry tree and juniper, between natural ponds and cyclopean rocks. Each hole offers a breathtaking scenery of Cala di Volpe.
The nearby granite formations have for years been a paradise for lovers of trekking and free climbing. 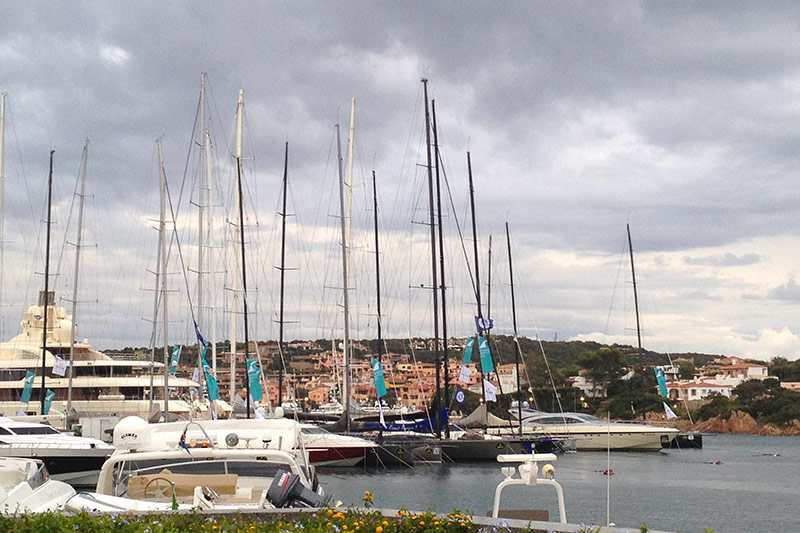 Things to see & do

CANNIGIONE Visit the village of Cannigione, a hamlet of Arzachena once inhabited by local fishermen and today a busy tourism center. Boutique shoppin with less exorbitant prices alongside stores selling the best of local produce.

CAPO D’ORSO Drive along the coastal road, there are numerous hidden coves of myrtle and mastic, to Capo d'Orso. An easy stepped trail leads up to the famous rock, where you can admire the view of La Maddalena, the other islands of the archipelago and in the background, the mountains Corsica.

ARCHIPELAGO OF LA MADDALENA Book a boat trip to the islands of the archipelago. Depart from the pier or from Baja Sardinia Cannigione, stopping for an hour in the town of La Maddalena, onto the islands of Spread, Casings and Santa Maria with the possibility of bathing in the crystal clear waters and lunch is offered on board

PORTO CERVO and BAJA SARDINIA This panoramic route was made famous by a James Bond film, arrive in Porto Cervo and walk through the narrow streets with Moorish architecture, visit the square and admire the windows of the most famous designer labels. Onwards to Poltu Cuatu, made famous by Umberto Smaila, up to Baja Sardinia, the beautiful wide beach of Battistoni with its doorways overlooking the elegant boutiques.

NURAGHI AND TOMBS OF GIANTS Exit at Arzachena, take the road to Luogosanto, the Nuraghe Prisgiona and the tombs of the giants of Coddhu Ecchiu and Li Loighi are among the most representative monuments of Nuragic civilization. A little farther on, are also worth visiting are the necropolis of Li Muri, the Nuraghe Albucciu and the temple prenuragico Malchittu.

LUOGOSANTO HOLY PLACES Along the road to Luogosanto, leave your car in the square below the castle and climb up to Balaiana (via the path with steps) up to the castle and the church of San Leonardo. Before Luogosanto, two other places of great interest: the castle of Baldo with the church of Santo Stefano and the hermitage of San Trano, which offers an amazing view. In the center of Luogosanto, the ancient basilica of the twelfth century with its granite facade and the holy door that opens every seven years. The tour ends with a picnic in the forest of La Filetta, with its source from which flows a water purest and best of Sardinia.

GARIBALSI'S ISLAND Taking the ferry from Palau to La Maddalena then via a, convenient shuttle, you reach Caprera with its unmissable Garibaldi Museum which contains relics and memories of the adventurous life of the Hero of Two Worlds. Alongside the Garibaldi Museum, the Maritime Museum recalls the activities of the military arsenal, an exhibition with wooden models and a section devoted to Latin sails.

NAPOLEONE'S ISLAND Santa Teresa is the most northern town of Sardinia. Built 200 years ago by the Savoy, as a reflection of Turin, the town will charm you with its neat little houses and the orthogonal design of the streets and squares. The promontory of Capo Testa is home to the largest and most impressive displays of rocks that seem sculpted by the great artist.

BETWEEN BANDITS AND GRANITS All the views within the Gallura region are unique, but a trip to Aggius, with its mountains and moon valley offers views that are out of this world. Do not miss a visit to the Ethnographic Museum (the largest in Sardinia), at the centre of Tapetto the only Pirate/Thief Museum, with items from the great hauls â€˜Muto di Gallura;. In the â€˜agriturismoâ€™ restaurants try the excellent "Suppa cuata" and other local specialties. In the center of Tempio, the capital of Gallura, everything is made of granite: the pavements, monuments, beautiful palaces, the romantic promenade leading to the New Fountain.

In addition to all marine sports (sailing, diving, surfing), this area offers other prestigious sports opportunities. The 13 hectares of grass and granite of the Shergan racecourse are available for riding schools, pony schools, riding stables, training, horse boarding, equestrian trekking. Several national and international competitions are held there but its fame owes above all to the Costa Smeralda polo cup. In this enchanting glimpse of Sardinia, the spectacle of the eight competing knights competing for victory in a noble competition that is thousands of years old is unmissable.
The Pevero Golf Club, recognized as one of the best golf courses in the world, smells of myrtle, strawberry tree and juniper, between natural ponds and cyclopean rocks. Each hole offers a breathtaking scenery of Cala di Volpe.
The nearby granite formations have for years been a paradise for lovers of trekking and free climbing.

LA MADDALENA the Nino Lambroglia Naval Museum is dedicated to the Roman ship that was wrecked near the island of Spargi around 120 B.C. while carrying hundreds of wine amphorae and tableware vases made in Campania.

CAPRERA In addition to the Garibaldi Museum, the Maritime Museum tells the story of the activities of the military arsenal, with an exhibition of wooden models and a section dedicated to Latin sail.

The Ethnographic Museum of Gallura houses more than 5,000 artifacts dating from the end of 1400 to the first half of 1900. The most valuable piece is the hammer of "Femina Agabbadòra", the oldest tool used to practice euthanasia.

OLBIA The National Archaeological Museum exhibits some of the Roman ships found on the bottom of the port.

TEMPIO PAUSANIA The museum Bernardo De Muro is a tribute to the famous tenor tempiese, a masterful interpreter of the works of Verdi and Mascagni. You can admire costumes, photos, portraits, personal objects, posters advertising concerts and recordings. It also houses exhibits of other local characters from the world of music, from John Gavino Gabriel Manurita up to Fabrizio De Andre, who spent the last years of his life near Tempio. Also in Tempio, the Historical Cork museum has a large exhibition of old machinery and artifacts in cork alongside a collection of precious books (since 1896) on cork and the ancient production activities related to it. Birds and war memorabilia, (via Fadda 2, tel. 079.630996), the ornithological collection created in the late nineteenth century by General Francesco Tonnage includes about 400 species of birds of Sardinia, as well as memorabilia of the wars in Africa and the First World War.

The Pevero Golf Club, recognized as one of the best golf courses in the world, smells of myrtle, strawberry tree and juniper, between natural ponds and cyclopean rocks. Each hole offers a breathtaking scenery of Cala di Volpe.
The nearby granite formations have for years been a paradise for lovers of trekking and free climbing.

THE BEACHES
Moving eastwards, the view is lost on that world-famous emerald and cobalt sea. Just a few kilometres of road to reach the beaches of the Costa Smeralda: sand that looks like flour caresses the pinkish granite in front of a coastline of headlands, gulfs, islets and fjords. The nearest beaches are those of Portisco (the village's traditional natural harbour) and Rena Bianca. Then Razza di Junco, Capriccioli, Romazzino, Liscia Ruia, Petra Ruia, La Celvia, and the Spiaggia del Principe in a succession of coves and inlets lapped by that crystal-clear sea so beloved by the international jet-set.

THE MARINAS
For ancient mariners, the inlets of the coast were a blessing from god when the mistral wind blew. For todays sailors too. Those natural harbors are now equipped and frequented by best sailors and yachtsmen. The Portisco Marina, in the Gulf of Cugnana, has 600 berths at the port with water depths of up to 10 meters. The marina of Porto Rotondo is extremely well equipped, while at the gulf of Arzachena, opposite the island of Caprera, the Cannigione marina has 400 moorings . Sheltered from all winds is the spectacular Porto Cervo ,between the Old Port and the New has 700 berths. This highly regarded port is home to particularly important regattas such as the Rolex Cup, Vitton Cup, Italian and World Yacht Championships.

INTERNATIONAL EVENTS
The elegant atmosphere of San Pantaleo lies in the perfect balance between traditional and modern concepts with bite size tastes of contemporary concepts in every season. In late July, the festival dedicated to the patron saint of the village unites a religious theme with a full calendar of art, culture and entertainment. In the scenic urban stage of the main square "The Great Dance has been" housed since 2005, involving major players from the international ballet scene. Carla Fracci, Luciana Savignano, Oriella Dorella, Gheorghe Iancu, Elizabeth Terabust, Etoile of the Bolshoi and La Scala have alldanced under the stars of San Pantaleo.

MARKETS
In true summer tradition the visitors to the Emerald coast would not miss their appointment with the hippy chic market, held every Thursday morning. The main square and the streets around it are completely occupied by stalls full of sophisticated merchandise. The atmosphere is more bohemian than market, thanks to exhibitions made up of prestigious pieces of vintage costume , the most unique "American stuff" , one off pieces of modern design and crafts reserved for true connoisseurs of chic. On these occasions the doors of the many local art and craft studios open up to visitors. Other markets are held in Cannigione (Monday), Arzachena (Wednesday), Palau (Friday), Porto Cervo and Santa Teresa (Saturday), Baja Sardinia (Sunday).